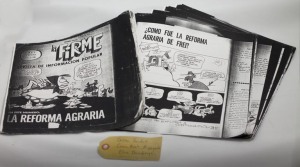 This comic book is from the 1970s when Salvador Allende the democratically elected Marxist became president of Chile. And basically they tried to redevelop Chile into a socialist paradise… The point of it was to teach people how to be socialist. And so this is the first issue and it’s about agrarian reform… but they try to tell the story of what it means to be socialist.

The reason I ended up with this is because I wanted to write my undergraduate thesis on propaganda… and Stanford had a huge collection. The military dictatorship that came in 1973 pretty much destroyed all of them. So I don’t know how many there are existing still… Since I needed them for a year I photocopied all of them…