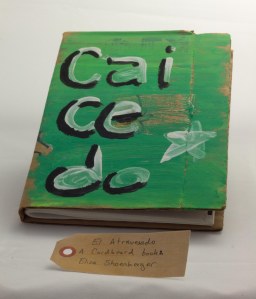 This is a cardboard book. The binding is made from recycled cardboard and it is hand painted. It’s from Buenos Aires, Argentina and it’s actually a novel called El Atravesado…

I spent a month in Buenos Aires a few years ago in  2007, and while I was there I found this book in a used bookshop and it is from a publishing company…a cooperative from a neighborhood called La Boca and it basically came out of the [Argentinian] economic crisis in the early 2000s…

There was an underclass of people called cartenaros who would go through garbage and find cardboard.  The government would pay them by the pound and it was kind of like a social program.

[the publishing company] decided to come up with an alternative model…they bought cardboard from this underclass of people, carteneros…and pay a better rate than the government and use it to bind their books.