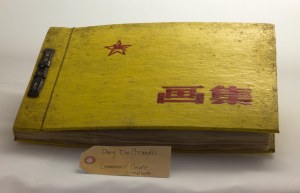 Walking in the stalls outside of the fog obscured Beijing I would pass stall after stall in this market of people selling plastic buckets, badly made Mao watches, Gucci reproductions, and communist propaganda. […]

Of course the artist in me was completely mesmerized by communist propaganda and paraphernalia, and everything that was proliferating everywhere around me. The strong imagery, the intense colors, the socialist pride, the bold ideas, the emotion that was trying to visually lack emotion. It all sucked me in. […] The fact that I knew the way that the story ended only made my outsiderness all the more guilty for wanting to collect it. […]

As you turn the pages through it, each page has glued pictures of various communist propaganda […] Basically it’s a curated group of propaganda images and it’s got your usual images of Mao, women fighting at the front, industrious workers, everyone reading the little red book. […]

I was just a white girl buying someone else’s property, I was an American who did not could not understand what this couple had been though, what they had seen, but was able to purchase another person’s nostalgia for mere dollars. […]

Click here to read the transcript of the entire talk.